Saturday Sutting (Translation: Saturday Wanderings) is our attempt to get away from the monotony of daily life in search of some fresh air. A Saturday Sutting is all about day trips from Bangalore. Here is the second one of the series-

Kannada folklore tells a tale of a young man Sala, who saved his Jain guru Sudatta by striking dead a Tiger he encountered near the temple of the Goddess Vasantika at Angadi, now called Sosevuru. The word “strike” literally translates to “hoy” in Hale Kannada (Old Kannada), hence the name “Hoy-sala”. This legend first appeared in the Belur inscription of Vishnuvardhana, but owing to several inconsistencies in the Sala story it remains in the realm of folklore.The legend may have come into existence or gained popularity after King Vishnuvardhana’s victory over the Cholas at Talakad as the Hoysala emblem depicts the fight between the mythical warrior Sala and a tiger, the tiger being the emblem of the Cholas

I am a history buff and have always been amazed by the scale & design of things that people managed to build with just hammers & chisels many hundreds of years ago. The Hoysala empire is famous for its beautiful temples with intricate carvings adorning the walls,both inside and out. The Belur & Haleebedu temples are outstanding and well known examples of Hoysala architecture and attract bus loads of tourists(quite literally!)  who do not  give you the time,luxury or space to enjoy the beauty  of and soak in the atmosphere of these temples.

Hence the logical approach was to find the lesser known temples that are not part of the normal tourist circuit but still do justice to the “Hoysala” era.Some research and reading later, we realized that the list of temples is indeed a long one and will need a good 4-5 days to cover them all. The best thing to do was to  divide and conquer by building route maps that can be covered over multiple day trips.

The weather was perfect, thanks to the Cyclone Nada, with a mix of rain and lots of cloud cover. We set off at 6 am and after a quick pit stop at Swati Delicacy for some yummy dose we reached Mavinkere Temple for some fog covered views. The temple wasn’t open and we quickly moved on to the first Hoysala temple at Mosale

Koravangala was the next stop and what a beauty this temple turned out to be. The layout of the temple is unlike  most Hindu temples,which have the main entrance facing the deity. You typically enter the temple complex and run into a ‘DwajaSthambha’ which aligns you to the direction of the sanctum sanctorum which isnt the case here!  The entry into the temple doesn’t face the deity  and the Sthambha is conspicuous by its absence.

The banana flower design. In a lot of temples you will see this design engraved into the ceiling, with the center piece designed to look like a banana flower. My imagination fails when I try to estimate the time & effort required to carve something like this in stone,upside down and not once but in pretty much all of their temples!

The turnoff to the Doddagaddavali temple is quiet easy to locate –  look out for a big hoarding on your left when coming from Hassan towards Belur indicating the turnoff.

Temple contains 4 deities – Lakshmi devi, Narayana, Shiva & KaaLi. KaaLi is not a commonly worshiped goddess in this part of the country.Here She is worshipped as “Shanta KaaLi / KaaLi Devi” or “the Calm Kali” as opposed to the Roudra Kaali/ KaaLi Mata or “the Angry KaaLi” in Bengal.  The ceilings are adorned with beautiful stone carvings depicting mythological events.

Here again the temple layout is a little hard to comprehend as the temple entrance does not align with the placement of the deities. The Narayana idol was stolen a decade ago and now is in in the UK. Apparently PM Modi has got assurances from the folks in UK that the idol will be shipped back to India and will be reinstalled here.

This is known as trikuta (three shrined) temple.This has to be my pick of this trip as the beauty of the place lies in the exquisite idols in the sanctum sanctorum. The priest informed us that the idols were made from Saligrama shila (Fossilized seashell stones. The Venkateshwara idol in Tirupati is also said to be made of the same stone). The idols capture you with their sheer beauty and radiance. VeeraNarayana, Gopala & Yoga Narasimha , the 3 resident deities are beautifully carved and a treat to the eyes.

The orientation of the temple,from the entrance to the main deity of VeeraNarayana is so  impeccable that,on the day of Vernal Equinox,in March, first rays during sunrise fall directly on the idol and light it up – as claimed by the priest.

With no one around, this place was the epitome of peace & quiet. You need to experience the aura of this place and let it sink in.

A relatively smaller temple that was not open when we visited. Spent time walking around the temple complex and clicking a few pics.

Arkere Chennakeshava Temple is again a small temple but the highlight of this temple was the Lakshmi Narasimha idol – you dont often see idols depicting Lakshmi sitting on Narasimha’s lap.

This was the last stop and we reached there amidst a steady drizzle. There was some crowd as the temple is well known. The exquisite dance hall outside the temple is a work of art and sitting there watching the rain was an experience 🙂

The dome like top structure on the dance hall seems out of place as most Hoysala roof structures are either step like pyramids or flat structures. Same is the case with the Nandi on the main temple gopuram – never seen anything like that before. They seem like an afterthought ,But then it could as well be designed so, to balance the intricate stonework on the inner ceiling of the dance hall. 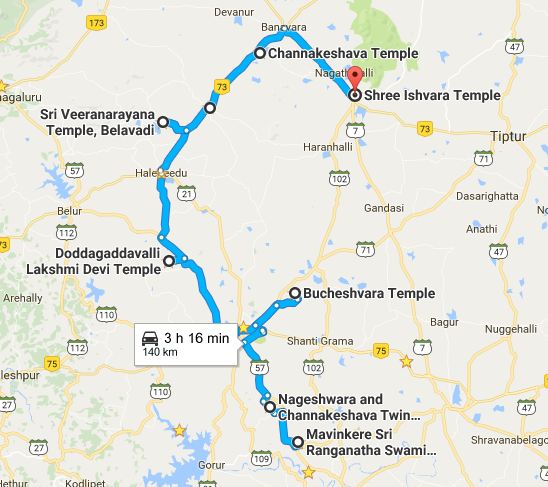 Roads are all good and you just need to follow google maps till the village turnoff and then ask around to get to the temple entrance. Halebeedu – Javagal seems to have a relatively new surface and its bliss to drive on. Apart from the Banavara – Arsikere stretch where there is traffic, all the other roads have minimal traffic and it was just perfect given the weather. Even the Arsikere – CR Patna stretch is a good drive but you do need to keep a watch out for the usual suspects – cattle, 2 wheeler and the occasional idiot in the car.

Do watch out for Tour de Hoysala – Part 2