We decided to end 2016 by chasing hoysala architecture across the state.The plan was to visit a few temples near Sagara & Shivamogga and get back to Bangalore for new year celebrations.

The Harihareshvara temple is a relatively well known temple in Harihar and there was some crowd when we got there. Again another fine example of hoysala art on the outside but the best part of the temple is the intricately carved doorway leading to the sanctum sanctorum. Even the entrance threshold is carved here, which is usually a stone slab in most other temples.

A beautifully maintained example of Hoysala art, this temple also houses the ASI museum which contains various carvings & artifacts. This temple was supposedly a center of learning and the rich detail on its walls and vimana are a testament to its importance. 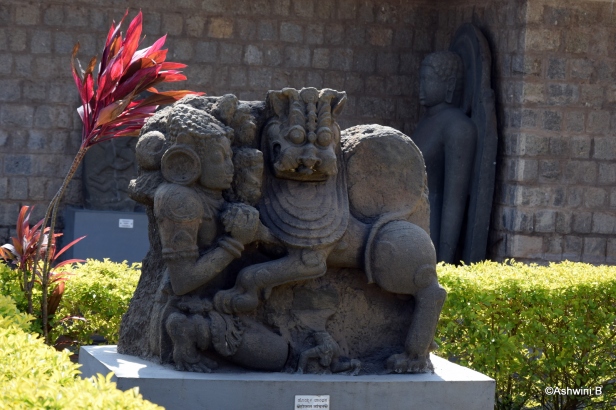 The Hoysala emblem in this case seems to be a mirror image of the actual emblem, wherein Sala is usually on the right.

The ancient temple which contained the 6 feet , 32 handed figure of Bhairava was demolished by the Sultanate after which the Ikkeri Nayakas rebuilt this temple in a mix of Hoysala + Dravidian style. The temple walls are red in a lot of places and the evening colors only added to the beauty of the place. 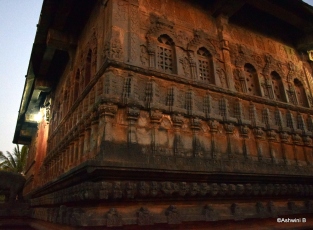 The nandi is massive, has its own enclosure but been ravaged over time & is missing most of its tail.

This is supposedly a Shakthi Peetha – do note the goddess like images carved in the base of the Shiva Linga. The Nandi in front is made of translucent marble and the priest shone a torch through the same to prove the point.

Very different style of architecture – not able to figure out what is amiss here but the door arch seems to be pointing to a different culture where as the intricate carvings on the door frame leading to the deity are very Hoysala. 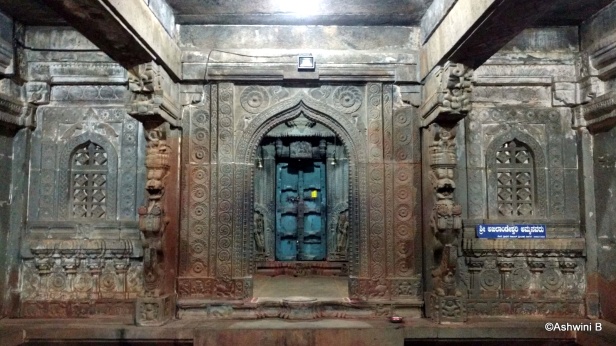 This temple again is associated with the Nayakas who ruled this area just after the Hoysala period. Temple architecture is again a mix of hoysala + dravidan style and the biggest attraction is the Ganda Berunda – Two headed garuda holding lions in its beak and elephants in its claw. This is the official emblem seen on KSRTC buses.

Supposedly erected during the reign of Rani Chennama and the image carved in the base of the pillar depicts Chemmaa giving sanctuary to Chatrapathi Shivaji’s son . One of the most ornately carved flag pillars that I have seen in a hoysala temple. 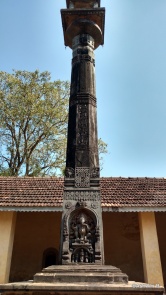 Face of a lion, chest of a tortoise, belly of a fish, elephant trunks for hands, legs of an elephant and tail of a crocodile. This creature was supposedly a Vastu figure which was created to ensure that the rulers have all the mythological support required to be successful. 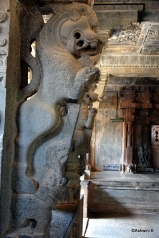 The Devi temple next to the Ramweshvara temple is a relatively smaller structure and does not have a lot on the outside. Walk inside and you get to see exquisitely carved wooden ceilings with rich detailing.  I did spend some time here but was unable to get good pics because of the sunlight.

Bangalore – Harihar – Ranebennur: Superb 4 Lane toll roads. Apart from the small stretch from the NH to Harihareshvara temple, the rest of the road is smooth tarmac where you can easily maintain 3 digit speeds.

Ranebennur – Hirekerur: 4 laning in progress for most of the route but even now the roads are very good with only an occasional patch or broken section. Not much traffic hence quiet a stress free drive.

Siralkoppa – Ulavi – Sagara: Narrow roads upto Ulavi with almost no traffic. Its a beautiful drive but do take care if driving after dark as its quiet lonely in this stretch.

Sagara – Keladi: The first few kms through sagara is quiet bad and there is no road but after the railway crossing, things get much better on the 2 lane road.

Do read Tour de Hoysala Part 1 & Part 3 and drop us a note with your feedback or share the post if you liked what you read!