Saturday Sutting (Translation: Saturday Wanderings) is our attempt to get away from the monotony of daily life in search of some fresh air. A Saturday Sutting is all about day trips from Bangalore. Here is the latest one of the series

This 13th Century temple is a good example of mature Hoysala construction. Structurally the temple does not seem to be in great shape as you can clearly see that the alignment is off. ASI seems to be moving things around and putting things back together to ensure that the monument is preserved.

The raised platform on which the temple is built is square while most of the other temples from the same time period have been built on star shaped platforms. The base of the main temple complex consists of 5 layers, each containing friezes of elephants, horse riders, lions, makaras and swans.

View from behind the temple 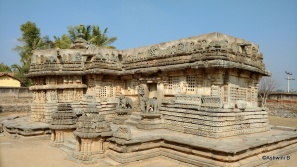 The temple walls are etched with carving of gods and demi gods from Indian mythology and here is a snapshot of some of the better known carvings. A lot of work on the walls have eroded over time and I dont think they will last another generation unless  some drastic steps are taken  to preserve them. 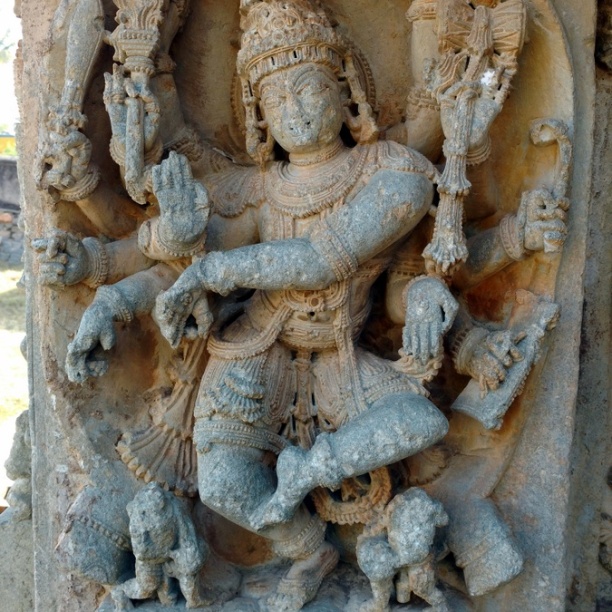 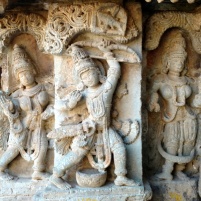 Arjuna aiming for the Fish 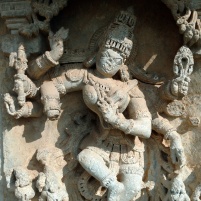 East of the temple is a pillar which has a lady standing on it. Some online sources refer to this as a immolation pillar similar to the pillar at hoysaleswara temple, Halebeedu. When we spoke to the local ASI person, he mentioned that the pillar also had another figure on top of it, which was shown falling down. He mentioned that the pillar is linked to myth of how the village got its name – in kannada ‘basari aalida ooru – basaralu’ translates to village ruled by a pregnant woman.

Route: You have 3 options to get to Basaralu depending on where you are starting from

We drove Route 1 as the roads are good all the way. Nagamangala – Basaralu is a good 2L SH with almost zero traffic and its a treat to drive on with lots of green cover. Do watch out for unmarked speed breakers and occasional cattle that will cross the road.

Route 2 is a good option if you will be starting from West Bangalore and once you cross Magadi, the roads are decent and you should not have a lot of traffic.

Route 2 is a good option for folks travelling from South Bangalore and IT corridor with a lot of pit stop options on the way. The only problem is that you will need to drive on the dreaded Bangalore – Mysore highway till Mandya.

If you are interested in exploring more of the lesser known Hoysala temple, do read Tour de Hoysala Part 1, Part 2 & Part-3 and drop us a note with your feedback or share the post if you liked what you read!